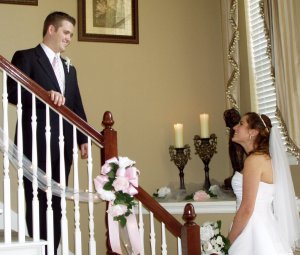 I’m not really a blogger, but I’m going to try this out. I guess this blog will be just a mumble jumble of all things Cody and Marissa. Where to start?

Well, we were married on October 4, 2008 in Richardson, TX. We met at the credit union where Cody works. He was helping me with some banking issues and I continued to call him after those issues were resolved. He let me know that it was okay to call him for things other than banking problems. So we officially exchanged numbers. We went out once or twice in February/March. I veered away from the relationship (can’t for the life of me imagine why I’d do that looking back on it now). We saw each other again in April/May and once again I went off into a different direction. The third and final time we started seeing each other was the one that took! We started officially dating June 29…Were engaged July 16…And as I said, were married on October 4. I am now a HUGE believer in second and even third chances! If it weren’t for Cody giving me chance after chance I wouldn’t be with him now!
We live in an apartment in Wylie, TX with our dog Molly. We’ve got no real plans in place for the future right now. We know we want to get into a house when our apartment lease is up, if we can. We know we both want to go to school, but not what for. We know we want kids, but want to wait a little while. Right now, I guess you could say we’re just enjoying living, enjoying each other, and enjoying youth while we have it!!
We have some GREAT friends that are also neighbors. Levi and Jessica P. and Brian and Jessica S. We never go more than a couple days without seeing them and we have really enjoyed their friendships. I really attribute a good portion of my sanity to them!!!
We both have great families that are always supportive. I don’t know what I’d do without my mom!!! She ROCKS!!!
I guess that’s about it for now!